To enable Tully Sugar Mill to crush sugar cane at a constant rate of around 700t/hr, a consistent supply of freshly harvested cane is required. To achieve this aim reliably and efficiently, a well-constructed and maintained rail network is exclusively used. Where the cane growing area has expanded well beyond the existing rail network, semi-tippers are used to transport the cane from the farm to the nearest delivery siding, where it is then brought to the mill on the rail network.

The entire rail network consists of over 200km of mostly 60lb rail for the main line, as well as approximately 80km of track for delivery sidings and loops.

The rail network meanders throughout the picturesque Tully district to encompass the cane growing areas, and is in a continual state of upgrade and expansion.

The rolling stock used to carry the harvested cane to the mill are called “Bins”. They have a nominal capacity of 4 tonnes. In the Tully district, these “Bins” are all paired up to form one “Unit” of 8 tonne capacity. They are only separated for maintenance or repair. This increases efficiency and assists in maintaining high mill crush rates.

There is also a growing fleet of 10 tonne bins being introduced into the system to replace the 4 tonne bins. There are approximately 1650 “Units” in service and these usually manage to carry an average of 8.3 – 8.5 tonnes each. In each day the Mill requires approximately 2100 loaded Units, so some Units are loaded twice in a day.

To haul the rolling stock Tully Sugar Mill currently has a fleet of 15 Locomotives.

Of these there are seven 40 tonne DH (Diesel Hydraulic) locomotives and six 18 tonne Com-Eng locos which are usually paired up as three “double-headers” and two 18 tonne Com-Eng locos that are not paired up. The double-headers are used to greatly improve tractive power and increase hauling capacity. In addition to this there are three 8 tonne Baldwin locomotives used for maintenance and repair work to the rail network.

On dayshift during the season there are 7 locomotives in service. During the night there are between 6 and 7 operating.

LOCOMOTIVES IN THE FLEET!

TONNES OF SUGAR CRUSHED EVERY HOUR! 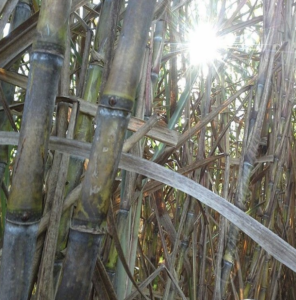 The sugarcane harvest generally extends from June until mid-November, weather permitting. Harvesting is a highly mechanised activity which utilises predominantly track harvesters and high flotation in-field transport units to deliver the harvested cane to sidings on the rail network.

Soon after harvesting, the sugar cane is transported from the farm to the factory in cane bins, hauled by diesel locomotives, along a narrow gauge rail network.  On arrival at the marshalling yards, the processing of the cane is scheduled so that the cane harvested earliest is processed first, this is coordinated so that the delay time from cutting by the harvester to crushing at the mill is no longer than 12 hours.  This maintains a fresh cane supply and should ensure trouble free processing.

Each parcel of bins supplied is called a ‘rake’ of cane rake of cane that the farmer has supplied.  Harvest data e.g. cane variety and age, field number, harvest time; which is collated with factory generated data such as weight of the rake and laboratory analysis of the sugar content of the rake.  The cane is then weighed and tipped onto a conveyor system which transfers the cane into the factory for the first processing operation at the shredder.  The empty bins are returned to the cane marshalling yard from where they are returned to the farms to be refilled. 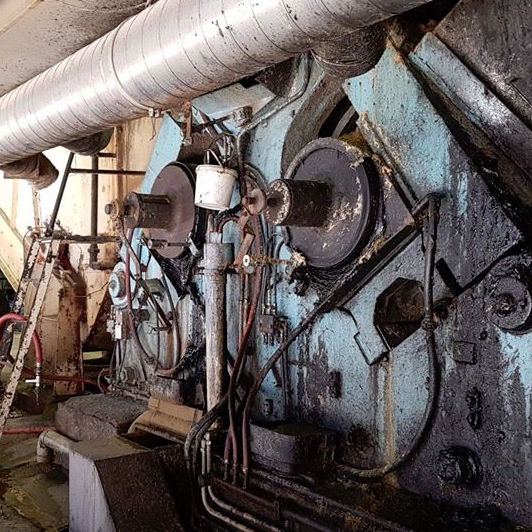 The shredder is a large, powerful hammer mill, driven by steam turbines, which smashes the cane into a fibrous material.  The cells in the cane stalk which contains the juice are ruptured but no juice is extracted at this stage.

The shredded cane is fed through a series of five crushing mills to extract the juice which is pumped away for further processing.  Each mill is driven by a powerful steam turbine.

The resultant fibre by-product which remains is called bagasse.  The bagasse is incinerated in the factory’s boiler furnaces to produce steam and electricity, both of which are used for processing operations in the factory.

The boiler station is the heart of a sugar factory.  Steam is produced in the boilers through the combustion of the by-product of the milling process bagasse.  This steam produced at high pressures is used to drive the Shredder and Mills turbines as mentioned earlier.  Steam is also used to drive the electricity generating turbines producing enough electricity to perform factory operations with the excess being exported to the local supply authority’s grid.

As mentioned earlier, steam is required for the boiling and heating processes of the syrup at both the evaporator and vacuum pan stations and it is the exhaust steam from the Shredder, Mills and Generator Turbines that provides this steam.

Bagasse, the fibre remaining after the cane is crushed, is incinerated in the factory’s boiler furnaces to generate steam and electricity.  When bagasse is produced in excess of the quantity needed to fill these requirements, it is stored in the bagasse storage bin and fed to the boilers during the time when the mill are not crushing cane.

Excess bagasse is transferred to onsite storage pads on the ground, covered by tarpaulins.  To be used later as required.

The sugar rich juice from the milling train contains impurities including soil which must be removed before further processing takes place.  This juice is heated under pressure in a vessel called a juice heater and then lime is added. 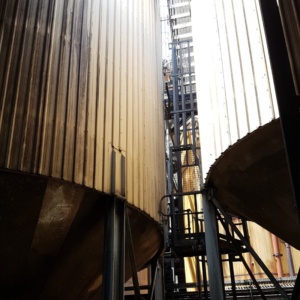 The evaporated juice is concentrated to a syrup (of about 60% sugar) by boiling off excess water in a series of connected vessels.  Each subsequent vessel operates under decreasing pressure with the last vessel being under an almost total vacuum.  This process is a very energy-efficient operation.

The mud drawn from the bottom of the clarifier contains a significant amount of sugar.  This is recovered and returned to the process by filtering the underflow mud through a rotating, cylindrical vacuum filter after the addition of fine bagacillo.  The process mud or filter cake is a rich fertiliser and is returned to the cane fields.

Concentration of the syrup from the evaporator is continued in vessels called vacuum pans.  Very small seed crystals are introduced into the concentrating syrup and these begin to grow in size.

When the crystals have reached the required size, the mixture of crystals and syrup is discharged from the pan.  The sugar crystals are then separated from the syrup in machines called centrifugals.  The centrifugal is similar in action to the spin cycle on a washing machine.  The separated syrup is reboiled and further sugar is crystallised. 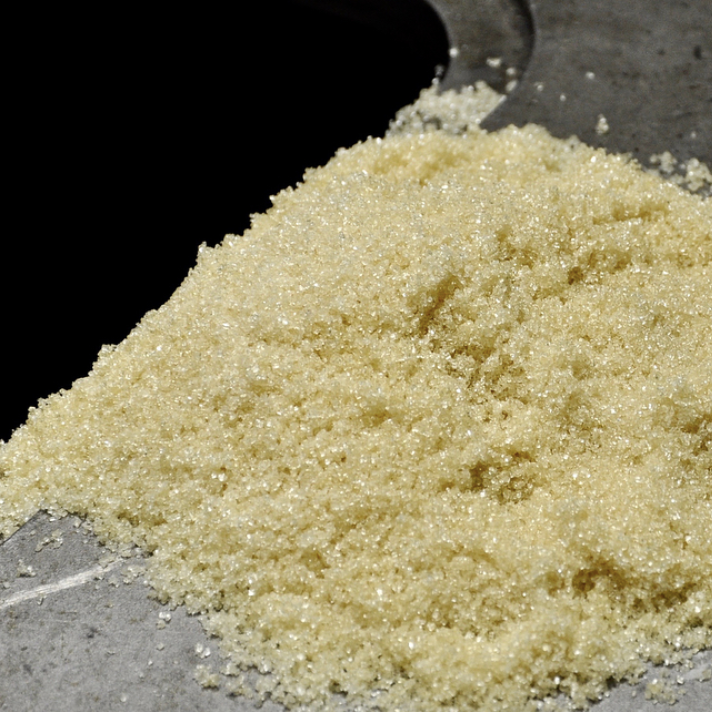 After three boiling, no further sugar can be economically recovered.  The residual syrup is called molasses which is used as a stockfeed and for manufacture of alcohol, both industrial and domestic.  After leaving the centrifugals, the moist raw sugar is tumble dried in a stream of dry cool air and transferred to bulk storage bins.

The raw sugar is transported from the factory to the Mourilyan Bulk Sugar Terminal using road transport.  At the bulk sugar terminal, conveyors are again used to load the raw sugar into storage sheds and then onto ships when scheduled, destined to export markets.